To share your memory on the wall of Victor Cote, sign in using one of the following options:

Provide comfort for the family of Victor Cote with a meaningful gesture of sympathy.

Print
Victor Paul Cote, 93, passed away at home on March 28, 2020 surrounded by his loving family.

Victor was the oldest of Paul and Edna Cote’s ten children. The family lived on a farm NE of Willow City, North Dakota. Victor attended a coun... Read More
Victor Paul Cote, 93, passed away at home on March 28, 2020 surrounded by his loving family.

Victor was the oldest of Paul and Edna Cote’s ten children. The family lived on a farm NE of Willow City, North Dakota. Victor attended a country school until the eighth grade and graduated high school from Notre Dame Academy in Willow City on June 1, 1945.

While on furlough Victor met Donna Grace Atkinson. They were married on November 26, 1948. Victor and Donna moved to Butte, Montana, in January 1951 where their daughters; Jocelyn, Pamela and Kimera were born and raised.

Victor started work in 1951 for the Northern Pacific Railroad until it merged to become the Burlington Northern Railroad. In 1974 Victor transferred with BNR to Missoula and worked until he retired in May 1989.

After Victor retired, he and a group of railroad buddies met every Tuesday and Friday mornings for breakfast. This tradition is still going strong, although members may have dwindled, the coffee and conversation have not.

Grampa Vic always had a jar of “Beans” (M&M’s) for his grandchildren to enjoy when they came to visit. He was always willing to lend an ear and give advice when needed. He was cheerful, kind, and helpful; someone who made you want to do your best and you could always count on him to be standing on the porch waving goodbye as you drove away.

Victor was proceeded in death by his parents, brothers Amie and Albert, sisters Cecilia and Lorraine and granddaughter Tara Jo Robertson.

In lieu of flowers, donations may be made to Partners In Home Care Hospice or a charity of your choice.

Condolences for the family may be left at www.cremationburialsocietyoftherockies.com

Private family internment will take place at Western Montana State Veterans Cemetery in Missoula. A Celebration of Life will be held at a later date.
Read Less

Receive notifications about information and event scheduling for Victor

There are no events scheduled. You can still show your support by sending flowers directly to the family, or planting a memorial tree in memory of Victor P. Cote.
Plant a Tree

We encourage you to share your most beloved memories of Victor here, so that the family and other loved ones can always see it. You can upload cherished photographs, or share your favorite stories, and can even comment on those shared by others.

Posted Apr 17, 2020 at 08:14pm
Vic was one of a kind! I will miss our banter sessions so much while I was pampering him. He was truly a wonderful man, and I am going to miss him so much!!! Donna, Kim, Jocelyn and Pam and the rest if the family that he always spoke so fondly of, Please accept my deepest sympathies! Sandy Hanson @ Très Chic
Comment Share
Share via: 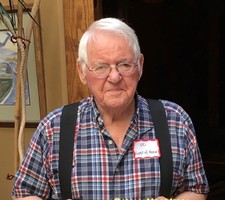