To share your memory on the wall of Steve Raykowski, sign in using one of the following options:

Print
LOLO, Montana – On Friday, June 28, 2019, Steven “Chopper” Raykowski, passed away at his home in Lolo at the age of 61 after a long battle with cancer.

A lifelong Missoula resident, the son of Harley and Betty Raykowski, he was bor... Read More
LOLO, Montana – On Friday, June 28, 2019, Steven “Chopper” Raykowski, passed away at his home in Lolo at the age of 61 after a long battle with cancer.

A lifelong Missoula resident, the son of Harley and Betty Raykowski, he was born on February 6, 1958. He attended Sentinel High School where he first met his high school sweetheart Cindy Larum, whom he dated for four years. They parted ways for 26 years, but eventually reconnected 14 years ago, finally marrying in 2013. He was a devoted and adoring father to his daughter Stevi Siloti Raykowski, born May 18, 1996.

Chopper worked in various construction jobs throughout his career, most recently at Poteet Construction. He took joy in the problem solving of building and the camaraderie of working with a team. He also bartended for years in Missoula, Bigfork, and the Flathead area. He will be forever remembered for his sense of humor and his creativity, which led him to create Missoula’s legendary Bartenders’ New Years’ Eve that continues to this day—some 30 years later.

He loved fishing, hunting, taking four-wheeler rides, and spending time with family and friends at Flathead Lake. Singing, and karaoke in particular, was a favorite hobby of Chopper’s, and he could frequently be found sitting in to sing a song or two with friends’ bands. He had an uncanny ability to make friends with everyone he met. If you were with Chopper, you were almost always laughing or at least had a smile on your face. He was known for giving thoughtful gifts which always had a special dash of mischief to them.

He is preceded in death by his father, Harley, and his mother, Betty. In addition to Cindy, his wife of six years, and Stevi, Chopper is survived by his stepdaughters Jessie and Nikki and their husbands Ryan and Jamie, his grandsons Taylor and Landon, his brothers David and Keith and sister-in-law Laura, his nephews Tim and Brian and Brian’s wife Rose and their two sons, and many close friends whom he considered family. A celebration of life for friends and family will be held later this summer at Flathead Lake. Condolences can be left for the family at www.cremationburialsocietyoftherockies.com.
Read Less

Receive notifications about information and event scheduling for Steve

There are no events scheduled. You can still show your support by sending flowers directly to the family, or planting a memorial tree in memory of Steve "Chopper" Raykowski.
Plant a Tree

We encourage you to share your most beloved memories of Steve here, so that the family and other loved ones can always see it. You can upload cherished photographs, or share your favorite stories, and can even comment on those shared by others.

Posted Jul 09, 2019 at 12:20am
Steve thinned trees with the Gold Creek Thinners in the summer 1976. He was a skilled woodsman who had a passion for hard work. I remember His Mom cooked lunch for us one day in the mountains an hour west from Missoula, as we took our break from cutting trees. Steve and I later went to California to fight wildfires in 1977. The Hog Fong Fire in Northern California nearly cost us our lives, as a falling, burning Redwood tree dropped on our path. I will never forget his smile, and his good heartedness. Tyler Sanborn 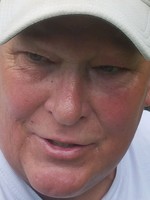