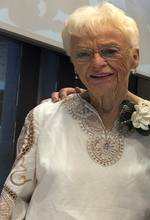 Sharon was born on July 1, 1942 in Sidney, MT to Orville and Clara Flynn. Shortly after Sharon’s birth her family moved to Missoula, MT. She attended Willard Grade School and graduated at Missoula County High School.

She married her high school sweetheart, Vern Jolliff, they met at the Wilma Theater, dated for five years and were married on September 2, 1961. The couple lived in Missoula and raised two children Jay Dee Jolliff in October 1963 and Tamara (Tami) Leigh Jolliff in December 1966.

When she was young she enjoyed gathering in the basements of family where they played on accordions, spoons and piano. They polka danced until wee hours of the morning. Her favorite past times were Friday night dinners at the Double Front Chicken, watching Grand Old Opry, Molly’s Polka Party and Daniel O’Donnell on Saturday nights, embroidering, particularly dish towels that she made as gifts for special loved ones, planting and caring for her flowers in her yard. She was famous for buying more plants than she had room for and they were more than likely pink. Her overall favorite was spending time with her family and watching her Grandchildren grow.

Sharon was preceded in death by her parents, Orville and Clara Flynn, her brother Orland Flynn and her sisters Donna Webb and Marlene Gallagher.

She is survived by her husband Vern, her children Jay Jolliff and Tami (Doug) Hayes, her five grandchildren Jessica, Justin, Coleman, Janae and Alissa.