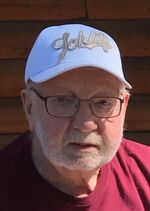 Roger Ingersoll, 76, peacefully passed away on Oct. 21, 2020 at his home in Missoula. Roger spent the last year of his life battling many health issues (not COVID related). Roger was a fighter and he didn’t give up, but rather he just wore out.

Roger was proud to have been born and raised on the Northside of Missoula. He graduated from Missoula County High School in 1962 and served his country in the Army Reserves. He later worked as a mechanic and was a bartender/manager at Eagles Lodge for over 30 years.

Roger was an avid sports fan and loved to spend time tail gating in his custom Griz van and rooting for Griz Nation. He was a lifelong New York Yankees fan and loved the San Francisco 49ers. He played baseball into his 40’s and enjoyed golf. He loved his red 1993 Chevy truck and 50’s rock-n-roll, especially Buddy Holly. Roger could be direct and stubborn, but he was also fiercely loyal and tender to those whom he loved. His lifelong friends from Red’s Bar and the Eagles Lodge became part of his extended family and they meant the world to him.

One of Roger’s great nephews, Crosby Vaughn (age 8), said it best. “I think Uncle Jerry looked down and saw Roger was in pain. He knew how great it was in Heaven and he missed Roger, so he asked Jesus to bring Roger up to be with him. I bet they’re playing baseball together right now.”

After our annual family reunions, we always parted with these words.

“Happy trails to you,

Until we meet again.”