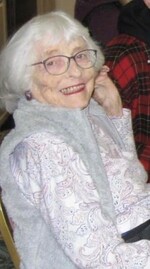 Norma (McLeod) Maloney (1928-2020), a well-loved wife, mother, and grandmother, died in a peaceful way at Community Hospital in Missoula, ending a life of committed storytelling that fed on a vivid memory of her early life.

Spirited, funny and completely herself, Norma was born in San Diego and grew up in small-town Ontario, California. Her life was marked by the early loss of her father and buoyed by a courageous mother and her stalwart grandfather who had moved west from Vermont. Her Technicolor recollections could take you up the steps of Chaffey High School in 1946, or off on the Red Car to Santa Monica, or once again to how she negotiated and sold her mother’s house at age 15 with a homemade sign. Norma had a presence, we believe, even then.

When her sister brought Paul Maloney over one evening, Norma was making piccalilli. She insisted this was part of what led to their romance, and they were married within two months. He was a chemical engineer with Sunkist when they met, and Norma kept a list of all the orchestras they saw and danced to. She was the flame, he was the cool water, and it worked beautifully for them. Making a home in Orange, Calif, they raised four daughters, Molly, Patty, Peggy and Dorothy, and a son, John. She was intensely proud of her family.

The loss of John to cancer in his 40s was a heavy blow, there’s no doubt, but Norma and Paul enjoyed a long and relaxed retirement. When Paul died in 2017, Norma took up the challenge of moving to be near family in Missoula, and she found life at The Village Senior Residence to be fun and rewarding. Kudos to her for being so brave – and finding a new audience for a lifetime of stories.

Missoula became a new playground for Norma. She loved outings to area restaurants and savored evenings at the Missoula Symphony, which preferably included a nightcap at The Depot. She was an enthusiastic, front-row fan of the Missoula City Band summer concerts in Bonner Park.

In many ways, coming to Montana was coming full circle – Norma’s father was born in Bozeman in the very early 1900s.

No formal services are planned. There will be a family celebration at a later date. We thank Community Medical Center staff for their kindness and compassion in Norma’s final days.