To share your memory on the wall of Mark Rust, sign in using one of the following options:

Mark was the first born child of James and Maxine Rust, entering this world on June 18, 1960 in Powers Lake, ND. He spent his childhood years in Columbus, ND graduating from Columbus High School in 1978.

He earned his Associate Degree in Forestry Services from North Dakota State University in Bottineau, ND in 1980 and then later continued his education at the University of Montana in Missoula in the study of wildlife biology.

Mark loved living in Missoula and made it his permanent home. It is there that he met his soul mate, Mary Ann Lorette. They were married in 1992 at Maxwell's Bar in Missoula, the very place they first set eyes on each other. Mark discovered that he had a passion for cooking and became a talented chef for various restaurants in the Missoula area. He even created a signature dish he called the Z Scramble that was often requested by many people.

Mark was a gentle, quiet, and intelligent man. He often had a book in hand and a cat on his lap while watching Jeopardy, frequently yelling out the correct answers. He never left his home without his signature fedora on his head.

He was preceded in death by his father in 2011 and his mother just 19 before him.

A private celebration of life is being planned for later this summer.
Read Less

There are no events scheduled. You can still show your support by sending flowers directly to the family, or planting a memorial tree in memory of Mark Conrad "Z" Rust.
Plant a Tree

We encourage you to share your most beloved memories of Mark here, so that the family and other loved ones can always see it. You can upload cherished photographs, or share your favorite stories, and can even comment on those shared by others.

Plant a Tree in Memory of Mark
Plant a tree 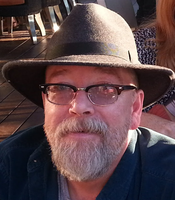