To share your memory on the wall of Lawrence Williamson, sign in using one of the following options:

Provide comfort for the family of Lawrence Williamson with a meaningful gesture of sympathy.

This date will forever have more significance for our family than it used to. Fitting for a guy who knew every Montana fishing hole in the Bit... Read More
Lawrence “Larry” Williamson

This date will forever have more significance for our family than it used to. Fitting for a guy who knew every Montana fishing hole in the Bitterroot and spent many a day in the Big Hole, Skalkaho, Mill Creek, Bass Creek, Petty Creek, Blackfoot, Brewster Creek, Clark Fork and pretty much any drainage he could find to dip a fly line and catch German Brown, Rainbow, Cutthroat, Brookies and even those winter trips to get whitefish to smoke, garbage fish as he called them.

A proper day fishing was a brown fishing basket strapped over his shoulder, waders on, lunch fit for a king packed by mom – and off they went. Until later years when mom had enough of trapesing through brush for the next hole to fish. In the 80’s and 90’s, he had Denny to go with him and then along came Hannah…grampa recruited her on any fishing trip she could.

Any day fishing or hunting was a great day…until he saw those xxxdamn ‘out-of-staters’ raiding “his” spots.

Larry Williamson was born on February 7, 1939 to Tracy and Grace Williamson in the Bitterroot Valley. Raised in Stevensville with an older sister, Violet, and a younger brother, Guy, Larry graduated Stevensville High School and it was off to California to begin his career building large steel structures – from oil refineries and chemical plants to specialized military installations and hard rock mines. His work took him throughout the lower 48 as well as the Alaskan North Slope for years, Hawaii, Guam, Scotland and the Philippines. It was always a special time, though, when he could lead a project closer to home in Montana. If he and his crew were a 12-hour drive from home, he’d see to it that they would get there even for a 2-day weekend. He loved Montana and he especially loved being home.

He was a champion storyteller! Arms in air, raised voice and (pre-retirement) a beer in hand, he spent countless evening hours telling stories of his hair-raising younger years and the crazy encounters he was in from a young, innocent guy fresh out of the Bitterroot to the well-traveled and more wise ‘Old Man’ who mentored dozens of young men in the tank-building industry, many of whom also hailed from Montana.

He was also a champion jokester! The funniest thing of all is when he would predictably repeat the punch line 3 or 4 times.

Several of those young men became leaders in the industry and a few more; owners of their own business that is now a leader in the industry. All of the men count Larry as one of their strongest mentors – a mentor in how to work safe and complete top-quality projects, but more importantly, a mentor in how to run a crew and treat people right. He wasn’t afraid to stand up for what he believed in, even when it meant running an MSHA inspector off of his job site, or making a late-night phone call to a corporate executive to tell him how corporate was chicken-shitting a project.

Yes, everyone always knew where he stood on a subject, even when maybe they shouldn’t have lol! Very recently, Larry said “I’d never have made it in today’s politically correct work society. It’s a good thing I retired when I did!”

Larry had 2 daughters, Terri and Mary, and 1 son, Denny. When Denny was 5, Larry met his soulmate in Ginny while working on a project for Conoco in Billings. At the time, Ginny was freshly grieving the loss of her son, Greg, and had 2 other children, Rhonda and Scott. Scott had recently completed high school and was one of those ‘early’ Montana recruits that Larry drew into the business. Rhonda was in middle school and “Gin” became mom to Denny – everything seemed to fall right into place.

Their partnership grew stronger and Ginny and Rhonda eventually moved west to Missoula where Larry and Gin were married and lived in the same home until he passed away on 4-06.

In addition to fishing and hunting, Larry LOVED Montana Grizzly Football and will forever be remembered hollering at the top of his lungs in the north endzone. He also loved Christmas time. When the kids and grandkids were young, he made Christmas extra special by painstakingly planning every detail on gift tags and paper wrap and preparing for Santa’s visit. These are among the many memories and stories that will be forever told of him.

Larry also loved Gin’s home cooking. From homemade breads and pies to mincemeat cookies and everything always made from scratch! He loved coming home to Gin’s meals. He also loved country music and could replicate any ‘Alabama’ song that was recorded – especially Dixieland Delight. He would sing it to Gin and us kids while they danced in the kitchen or go out dancing in their younger years. Fitting that he passed away on the same date as the ‘Hag’, the ‘Okie from Muskogee’s’ birth and death, another of his loved musicians.

And, much to the chagrin of some, he was a staunch, we mean staunch, Republican and politician at heart.

He loved staying up late at night watching boxing on satellite TV and making a midnight snack of salami, cheese and crackers or whatever he could muster up from the kitchen.

In recent years, you could always find Larry gardening, mowing and maintaining his many acres of manicured lawn, or sitting in his lawn chair soaking up the sun. His harder living as a young man finally caught up to him. COPD began to steal his daily quality of life. He was getting tired and worn and would speak of the next phase of his life openly and candidly. We just didn’t realize that phase would come as seemingly quick as it did. But we know that if a man’s measure for the next life has anything to do with size of heart, Larry (Grampa, the Old Man) is looking down on us and watching over us with fishing pole in hand and lungs that are finally breathing freely and at peace.

Surviving Larry are his wife, kids, grandchildren, sister, brother, several cousins, nieces and nephews. At his request, no formal services are planned. Following the pandemic, in the summer, the family will be memorializing his remains at a favorite spot in western Montana.

In lieu of flowers, the family suggests memorials in his name to Families First Learning Lab, PO Box 5626, Missoula, MT 59806 to help provide essential services to families in Missoula County as well as the organization’s move to the new public library.

We will love and deeply miss that crazy ‘Old Man’. Forever 4-06!
Read Less

Receive notifications about information and event scheduling for Lawrence

There are no events scheduled. You can still show your support by sending flowers directly to the family, or planting a memorial tree in memory of Lawrence T. "Larry" Williamson.
Plant a Tree

We encourage you to share your most beloved memories of Lawrence here, so that the family and other loved ones can always see it. You can upload cherished photographs, or share your favorite stories, and can even comment on those shared by others.

Plant a Tree in Memory of Lawrence
Plant a tree 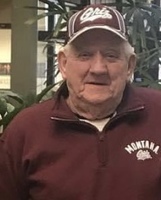