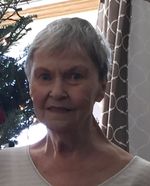 MISSOULA — JoAnn Lorene Skinner went to be with her Lord and Savior on July 22, 2019.

JoAnn was born in Decatur, Illinois, on June 5, 1939. She grew up in the St Louis, Missouri, area and lived with several different foster homes throughout her childhood. She graduated from Laboure High School in 1957 and then received her nursing degree from St. John’s School of Nursing in 1960. This is where she met and married Robert M. Skinner. They moved to Great Falls in 1966.

They were married for 17 years.

JoAnn is survived by her three children, Monica Skinner Henderson of Columbus, Ohio, Mark (Loreen) Skinner, of Missoula, and Rachel Ann Skinner, of Somers. She is also survived by her 10 grandchildren, who meant the world to her. Her joys in life were spending time with her family, especially those 10 grandkids and making meals for them. She will be truly missed by all who knew her.

Services will be held graveside at Highland Cemetery on Friday, Aug. 2, at 10:30 a.m. In lieu of flowers please donate to seethemhome.org (homeless shelter in Missoula).