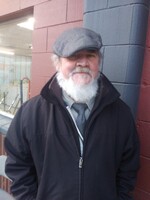 Harry John Fredrick Kreamer, 69, of Missoula MT, died unexpectedly in his home on April 10, 2021, of a heart attack.

He was born in Worthington, MN on Nov. 27, 1951, to Harold and Helen Kreamer. When he was four the family moved to Elgin, IL where his younger brother was born. He attended Larkin High School before moving to Madison, WI. He continued to live and work in Wisconsin until moving to Pensacola, FL, in 1987, where he attended Pensacola Bible Institute.

He eventually moved to Montana in ‘91, working multiple jobs to provide for his family.

He loved poetry and writing, often writing poems for his kids. He loved cooking, talking to people, baseball, his country, and was an avid reader, who loved the Word of God.

He is preceded in death by his parents and sister, Sharon. He is survived by his 5 daughters: Katrina, Hannah, Abigail (Patrick), Grace, and Verity, his grandkids: Jordy, Rowan, Isaiah and Tobin. His brother Jim (Kathy) and several nieces & nephews.

He will be missed dearly.

“But I would not have you to be ignorant, brethren, concerning them which are asleep, that ye sorrow not, even as others which have no hope. For if we believe that Jesus died and rose again, even so them also which sleep in Jesus will God bring with him.” 1 Thes. 4: 13-14