To share your memory on the wall of Everett Tudor, sign in using one of the following options:

Provide comfort for the family of Everett Tudor with a meaningful gesture of sympathy.

In January 1944 he joined the Marines and then fought on Iwo Jima for fourteen days, from February 19 to March 4, 1945 when he was shot. He received a purple heart and was honorably discharged due to disability. He did not talk about his war experiences until later when he wrote a short story about it. Late in his life, he started to tell more war stories to family members including one about how the raising of the flag on February 23rd helped to boost the morale of the soldiers for a time, but it sure wasn’t the end the fighting which continued until March 26, 1945. Once he was back home and healed enough, he returned to Manhattan and graduated from High School in 1946. Everett was very proud of our American Military, especially his grandson Jayson who is currently on active duty in the Army.

Everett married the love of his life, Marjorie (Williamson) in Bozeman, MT on March 4, 1951. They made their home together in Bozeman. He worked at the Quality Check Dairy in Bozeman and earned several awards for making ice cream and he was the plant manager for several years. In 1968 he was hired as a sanitarian for the Department of Livestock and moved his family to Polson. As the Western District Milk Inspector he traveled on a regular basis to all the Montana dairies west of the Divide. He was then promoted to Chief of the Milk & Egg Bureau and moved to Helena in 1978 and retired in 1988. After retirement, Everett spent many years caring for his bride and working on their home in Leisure Village. He was good at fixing things and built a little shop in a storage shed. He hung his initials above the door “ET” and we all had a good time joking about the movie character living in there. He also enjoyed taking care of the lawn and helping Marje plant flowers. Though he complained about having to move the big flower pots into the house whenever a frost was eminent, he continued to plant flowers in those same pots in the years after Marje passed away in 2007. They always had a little dog and sometimes a cat for company – Rocky, Gizmo, MinjLi, Corky and Patches to name a few. In 2013 Everett and his buddy Corky moved to Missoula to live with Justin and his family. Justin and his sons Tobias and Travis provided the loving care that afforded Everett a full life to 93 years old. They were blessed to have him in their home and enjoyed Grandpa’s quick wit and stories.

Everett will be honored with a military graveside service at the Fort Harrison Veterans Cemetery on Friday, September 13th at 11:00 am. After the service a lunch will be provided at Friendship Baptist Church, in Montana City.

We would like to express our appreciation to Hestia Home Care and Partners In Home Care for their assistance to Justin and his family and their loving care of Everett in his last days.
The family suggests memorials to Dad’s favorite TV church program; he called it “The old preacher” (Pastor Salem) of The Christian Worship Hour, PO Box 2002, Aberdeen, SD 57402.
Read Less

We encourage you to share your most beloved memories of Everett here, so that the family and other loved ones can always see it. You can upload cherished photographs, or share your favorite stories, and can even comment on those shared by others.

The Alling's sent flowers to the family of Everett L. Tudor.
Show you care by sending flowers

The Alling's purchased the Peaceful White Lilies Basket for the family of Everett Tudor. Send Flowers 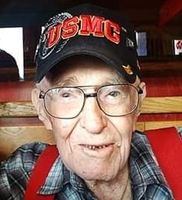