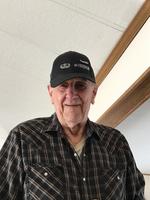 Emil F. Eigenmann Sr. was born February 11, 1928 in Missoula, MT to Ted Eigenmann and Juanita Eigenmann (née Hoffman). As a young teenager he went to work at the Missoula Stockyards and worked there until February 1946 when he enlisted in the United States Army. He was proud of his military service and was attached to the Army Ordinance Department serving in Italy and the 82nd Airborne as a paratrooper. After his honorable discharge in 1949 he came home to Missoula and within a week was working for John R. Daily Co. He retired from John R. Daily Co.

In 1975 Emil and Mary Ann discovered sapphire mining and it was this hobby that had Dad learning to facet and create beautiful jewelry for family and friends. He and Mom spent most summer weekends and vacations at the Chaussee Sapphire Mine in Philipsburg “washing dirt”. It became a fun family pastime that his children and many grandchildren enjoyed. Even though he was ill, he was still able to maintain his status as the best “dirt washer”.

Emil’s family would like to thank the staff at Partner’s in Home Care Hospice for their care and compassion.