To share your memory on the wall of Douglas Hallford, sign in using one of the following options:

Doug was an amazing father, brother and husband. He always knew how to put a smile on everyone’s face because of his amazing sense of humor. He was a very caring and giving man. He was an avid outdoorsman enjoying fishing, hunting, and camping with his family. Doug was once asked by his daughters what he did for a living. His response was that he moved mountains! His children came to realize that this statement from their father was true in more ways than one! Doug touched the lives of so many people and will be greatly missed.

A Celebration of life Potluck for Douglas and Pamela Hallford is scheduled for June.
Read Less

Receive notifications about information and event scheduling for Douglas

There are no events scheduled. You can still show your support by sending flowers directly to the family, or planting a memorial tree in memory of Douglas D. Hallford.
Plant a Tree

We encourage you to share your most beloved memories of Douglas here, so that the family and other loved ones can always see it. You can upload cherished photographs, or share your favorite stories, and can even comment on those shared by others.

Plant a Tree in Memory of Douglas
Plant a tree 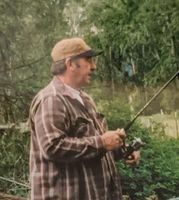