To share your memory on the wall of Dorothy Karns, sign in using one of the following options:

Provide comfort for the family of Dorothy Karns with a meaningful gesture of sympathy.

After her husband Bill’s death in 1988, she moved to Missoula where she became a non-traditional student at the University of Montana, worked at the Book Exchange, and became very involved in her church, especially with the ministry of the Walk to Emmaus. Dot became known as the “Pie Lady” because each summer she baked 175 pies for the church to sell at the Western Montana Fair as a fundraiser.

Dot was a loving wife, mother and grandmother. She is survived by her four children, Christine Patton of Lolo, Karin (Garth) Flint of Missoula, Shirley “Charli” (Conley) Crawford of Carrollton, Texas and Alan (Tami) Karns of Havre, eight grandchildren and five great-grandchildren, and a very special sister-in-law and life-long friend, Carolyn Tompkins of Missoula. Dot will be greatly missed by her family, brothers in law, sisters in law, nieces, nephews and her many friends.

A celebration of Dot’s life will be held Tuesday, June 4, 2019 at Garden City Church on Higgins Avenue in Missoula at 11:00 AM.
Read Less

We encourage you to share your most beloved memories of Dorothy here, so that the family and other loved ones can always see it. You can upload cherished photographs, or share your favorite stories, and can even comment on those shared by others. 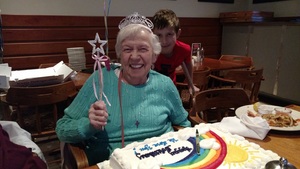