To share your memory on the wall of Doris Schmidt, sign in using one of the following options:

Print
Jean Schmidt (81) of Missoula passed away on Sunday, Aug. 2, 2020 at the Village Sr. Residence. Though she didn’t contract COVID-19, like many seniors, she was affected by physical distancing.

Jean was born in Great Falls, the youngest... Read More
Jean Schmidt (81) of Missoula passed away on Sunday, Aug. 2, 2020 at the Village Sr. Residence. Though she didn’t contract COVID-19, like many seniors, she was affected by physical distancing.

Jean was born in Great Falls, the youngest of four to Carl and Ida Tucker on January 5, 1939. At a young age her family moved to Bozeman. She worked in her family’s shoe repair shop and played coronet in the band. She attended college in Cheney to become a teacher, but wanted a change. In Phoenix she worked as a telephone operator. Missing Montana, she returned to Missoula.

Jean was introduced to Allen Schmidt by their brothers-in-law; marriage soon followed. They wed May 29, 1962 and raised their three children—Debbie Hendricks, Carl and Bill Schmidt—in their home of 57 years, filled with love and laughter.

Jean took her job as mother seriously, baking, acting as room mother, and Blue Bird and Cub Scout leader. She volunteered at CS Porter in the library and was a leader in the PTA: instrumental in getting a stoplight across Reserve St., working hot dog sales, and canvasing to keep Hawthorne as part of Missoula County Public Schools. She gave freely of her time and energy, acting as an example of kindness and responsibility.

She began working with Bethel #1 of Job’s Daughters locally when Debbie joined. Many family members were also involved in Job’s Daughters: nieces Nyla, Terri, and Kathleen; granddaughter Kara; and great-granddaughter Jubilee. Jean served as Grand Guardian for Montana, travelling the state as well as to national and international meetings and conventions. She mentored many young women over the years to develop speaking and organizational skills as well as poise and service.

Jean also helped Allen, Carl and Bill run the Melita Chapter Order of DeMolay fair booth as chief tzatziki sauce maker. She bowled, played cards, and enjoyed cooking for and spending time with family. Jean and Allen rarely missed a Lady Griz game. Though primarily a mother and grandmother, she enjoyed working the registration tables at the University of Montana, staffing election poll sites, and working the horse racing pari-mutuel booths at the fair.

In retirement, Jean and Allen could be found at Fairmont Hot Springs or playing the penny slots in Vegas, where they found all the best buffets. Jean canned the many fruits and vegetables from their garden, always sharing the bounty. She was so proud of her nine grandchildren and four great-grandchildren, happily cheering them on at many events.

Jean was very loved and will be dearly missed. Survivors include her three children, nine grandchildren, four great-grandchildren, and sister Patty, as well as extended family and friends. The family will have a Zoom celebration of life on Thursday, Aug. 6. Cremation has taken place and internment and a public memorial will take place at the Veterans’ Cemetery when restrictions are lifted. Please share memories at www.cremationburialsocietyoftherockies.com .
Read Less

Receive notifications about information and event scheduling for Doris

There are no events scheduled. You can still show your support by sending flowers directly to the family, or planting a memorial tree in memory of Doris "Jean" Schmidt.
Plant a Tree

We encourage you to share your most beloved memories of Doris here, so that the family and other loved ones can always see it. You can upload cherished photographs, or share your favorite stories, and can even comment on those shared by others.

Plant a Tree in Memory of Doris
Plant a tree 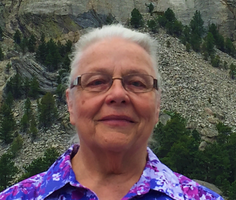