To share your memory on the wall of Delmar Lamb, sign in using one of the following options:

On February 10, 1954, while on leave, he and 16 year old Patricia, eloped to Coeur d’ Alene, Idaho, knowing that her father wanted the police to intercept them before they crossed the state line. With an altered birth certificate, wearing a back brace from a previous injury, Patricia pledged herself to Del for life. When they returned to Helena, and the men shook hands, her father told Del, “I have put up with her for 16 years, let’s see how you do it.” The couple spent the first two years of their marriage apart, Delmar serving in Korea and Japan, Patricia living in Helena. But God intervened to make sure this hasty, youthful couple beat the odds. They recently celebrated their 66th anniversary.

In 1958, when the railroad cut positions in Helena, they and their young sons Reed and Richie transferred to Missoula. There, they had two more children, Russell and Dianna. But the most important addition to the family came in 1963 when they trusted Christ as their Savior. And that forever altered the course of Delmar’s life. He served his church as treasurer and deacon, and was vice president of Lake Blaine Bible Camp for over 30 years. His servant’s heart was happy to mow the church lawn, help friends in need, and put grandkids to sleep on his magical sleeping shoulder.

His family and friends have many good memories of hunting, fishing and camping with Del. He kept a garden until recent years when Alzheimer’s made it too difficult. Even through his battle with Alzheimer’s’, Del kept his sense of humor. When asked how he was, he always said, “Ornery as ever.” His family did not feel that way, despite the many times he hid their car keys, pretended he’d step on their foot, and other pranks.

Also undiminished was his love for God. He inspired others by praying faithfully at weekly prayer meeting even when Alzheimer’s made his speech understandable only to God.

His memorial service will be Friday, March 13, at 11 a.m. at Faith Baptist Church, 2853 Briggs, reception to follow; and committal with military honors at 2 p.m. at Veteran’s Cemetery, 1911 Tower Street. Memorials may be given to Lake Blaine Bible Camp or Faith Baptist Church nursery.
Read Less

To send flowers to the family or plant a tree in memory of Delmar Lamb, please visit our Heartfelt Sympathies Store.

Receive notifications about information and event scheduling for Delmar

Provide comfort for the family with a meaningful gesture of sympathy.

We encourage you to share your most beloved memories of Delmar here, so that the family and other loved ones can always see it. You can upload cherished photographs, or share your favorite stories, and can even comment on those shared by others.

Ed & Marjorie sent flowers to the family of Delmar Lamb.
Show you care by sending flowers 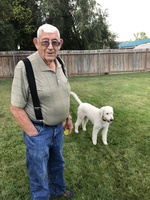 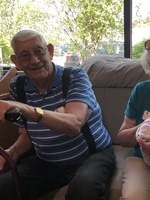