To share your memory on the wall of Charles Clark, sign in using one of the following options:

Print
Charles Tesco Clark, 81, of Missoula, Montana, passed away on Wednesday September 2, 2020, at his home surrounded by his wife and children. He was born on December 4, 1938 in Porcupine, Wisconsin to Lee and Mable Clark.

He graduated from... Read More
Charles Tesco Clark, 81, of Missoula, Montana, passed away on Wednesday September 2, 2020, at his home surrounded by his wife and children. He was born on December 4, 1938 in Porcupine, Wisconsin to Lee and Mable Clark.

He graduated from high school in Arkansas, Wisconsin and went on to serve our Country for four years in the Airforce. While stationed in Spokane, Washington he met his wife Hester, they were married on Sept 4, 1959 in Ronan, MT. After an honorable discharge, he chose to make Montana his home with Hester. They lived up Lolo Creek with their four children for 53 of the 61 years of marriage.

When his family was younger, he enjoyed spending weekends with them snowmobiling, camping, going to the stock races and huckleberry picking...Most of the berries never hit the bottom of his bucket!

Chuck spent many years behind a steering wheel. Whether it was in a Log truck, Flatbed truck, Snowplow or the little tractor that he built, he was right at home…His sons followed in his footsteps!

He retired from the State Highway Dept. in 2004 after many years of taking care of Hwy 12 from Lolo to the top of Lolo Pass. He always took pride in his work, no matter what it was.

Preceding Chuck in death were his parents Lee and Mable Clark, his brother Lyle Clark and his son Richard Clark.

Dad will be greatly missed by all that knew him. In his own words “See you around, like a doughnut”

Cremation has taken place by Cremation Burial Society of the Rockies. Due to the covid-19 restrictions we are only able to have a private internment. It will take place on October 9th at 11:00 AM at the Western Montana State Veterans Cemetery, with full military honors.
Read Less

Receive notifications about information and event scheduling for Charles

There are no events scheduled. You can still show your support by sending flowers directly to the family, or planting a memorial tree in memory of Charles T. Clark.
Plant a Tree

We encourage you to share your most beloved memories of Charles here, so that the family and other loved ones can always see it. You can upload cherished photographs, or share your favorite stories, and can even comment on those shared by others.

Posted Sep 10, 2020 at 10:49am
You will be missed, Grandpa. But your legacy continues to live on through your family. Give Richard a big hug for me!
Love, Deborah
Comment Share
Share via: 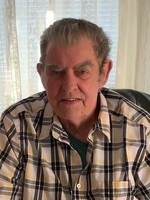