We're sorry but the candle you have selected is currenty in the process of being purchased or has just recently been purchased.

Please feel free to select another candle or check back in 15 minutes to see if the candle you have selected has been released for purchase.

We're sorry but there are no candles available for lighting.

You have already begun a candle purchase session. If you would like to continue with your current candle choice please click "Continue" otherwise please click "Select Another".

In Memory of
Darlene R
Guerdette
1947 - 2017
Click above to light a memorial candle.

The lighting of a Memorial Candle not only provides a gesture of sympathy and support to the immediate family during their time of need but also provides the gift of extending the Book of Memories for future generations.

In the event that there is an error
in the information presented,
please contact the funeral
home by clicking here. 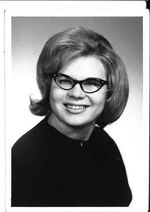 Darlene was born on Sept. 13, 1947 in Minot, North Dakota to Charles Guerdette and Ruby (Nelson) Guerdette.

In her early years, Darlene lived in Minot, Fairbanks and Las Vegas, but Montana and more so, Missoula soon became home for the rest of her life. She held pride in being the last graduating class, (’65) from Missoula County High School. With a ’66 Mustang and enrollment in a nursing program, her childhood dreams were unfolding.

In 1969 Darlene's first and only child, Michael was born. The two lived with her father, Charles, "Pa", until he passed away in '75 at the age of 58. She worked hard raising Michael, continuing education and working full time as an ICU/CCU nurse at St. Patrick's Hospital. She took on temporary employment at Nursing Homes and Labelle's/Best to make ends meet or when Christmas was near. When Michael left for the Navy, she finished her degree and became an RN in the Emergency Department at Community Hospital where she also enjoyed ambulance nursing for a short time.

Her life was full of hobbies including ceramics, cooking, dancing, knitting, sewing. She took great pride in umpiring girls little league and teaching aerobics, with the motto, "If a fat girl can do it, you can to!" She was a devoted animal lover and stray meant nothing since any wayward animal on her property immediately had a loving home.

Darlene had many names; she was a sister, (Sis), to Jerry, Auntie Dar to Kelly and Darlin Dar, (or simply "Dar") to many. But it was 1995 when her most cherished title was unveiled and "Grandma Dar" was created, with her email and license plate proudly reflecting who she was.

Darlene's career, activities and loving nature touched so many. Her loss will be felt near and far for decades.

So, Goodbye Darlene, you will be missed!

Funeral service will be held July 8, 2017 at First Lutheran Church at 11 a.m., followed by a potluck reception.

In lieu of flowers, please contribute to the First Lutheran Church honorarium.

To send flowers to the family or plant a tree in memory of Darlene R Guerdette, please visit our Heartfelt Sympathies Store.

This Book of Memories brings those affected by loss together by encouraging communication and self-expression. By giving friends and family a special place to tell their stories and express their feelings of loss, it helps them care for one another during a very difficult time. Click on any of the links to the right to access features or information within this memorial website.