We're sorry but the candle you have selected is currenty in the process of being purchased or has just recently been purchased.

Please feel free to select another candle or check back in 15 minutes to see if the candle you have selected has been released for purchase.

We're sorry but there are no candles available for lighting.

You have already begun a candle purchase session. If you would like to continue with your current candle choice please click "Continue" otherwise please click "Select Another".

In Memory of
Donald R
McFarlane M.D.
2017
Click above to light a memorial candle.

The lighting of a Memorial Candle not only provides a gesture of sympathy and support to the immediate family during their time of need but also provides the gift of extending the Book of Memories for future generations.

In the event that there is an error
in the information presented,
please contact the funeral
home by clicking here. 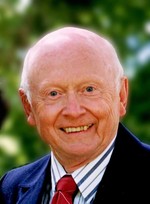 Shortly after returning to the University of Minnesota for his residency in radiology he met Dianne Kittock. They fell in love and were married in 1959. He was Board Certified in 1960 with the American College of Radiology. In 1961 Don and Dianne moved to Lansing, Michigan, where they started a family, having three daughters and a son. In 1974 the family moved to La Grande, Oregon, where Don joined his friend John Indihar in radiology practice. In 1998, Don and Dianne retired to Missoula, Montana. After surviving a brain hemorrhage in 1999, he lived to enjoy all his grandchildren and many summers on the shores of Flathead Lake in Montana with family and dear friends.

During their life together, Don and Dianne shared a love of flying as private pilots, taking many trips with their family throughout the US, Canada, and Mexico to vacation and visit relatives and friends. While practicing medicine in Oregon, he also regularly flew to hospitals in Enterprise and Baker City. Don enjoyed hiking, camping, cross-country skiing, opera, and RV touring. He was a loyal friend. He and his lifelong friends Max Hurdelbrink and Russ Zurkan shared many laugh-filled adventures, including a teen-age road trip from North Dakota to Minneapolis unbeknownst to their parents. An expedition in the RV to Alaska in their retirement added to the three friends' life-long memories.


To send flowers to the family or plant a tree in memory of Donald R McFarlane M.D., please visit our Heartfelt Sympathies Store.

This Book of Memories brings those affected by loss together by encouraging communication and self-expression. By giving friends and family a special place to tell their stories and express their feelings of loss, it helps them care for one another during a very difficult time. Click on any of the links to the right to access features or information within this memorial website.